The gear we use: 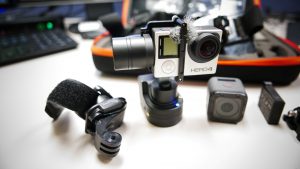 GoPro Hero4 Black (or Silver) – GoPro is the goto here, especially the Hero4 Black an Silver models, these two give a great image and audio, and although cheaper copies exist, they seem to fall short on one or the other (Audio usually).  GoPro’s own Hero5/6 line suffer from audio issues as well, so much so that most consider them unusable in a gimbal.  (The new microphone setup boosts the noises the gimbal motors make while they are gimballing).

Chest mounted gimbal – We use a 3 axis gimbal for gopro use, my preferred is the EVO SS, I did recently have to mine in for warranty repair and they had it turned around in a day, that is awesome service!.  I will dedicate a post to the settings that will help you get the most out of it {HERE}.  I was originally intrigued by the ability to use a jumper to power the GoPro from the gimbal, but in practice I have never needed to use that feature. 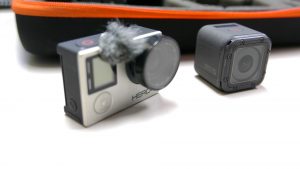 GoPro Hero Session – This little camera is ideal for secondary shots, you can cram it into tight spaces, its waterproof, the image quality is the same as its larger brother, but it comes at the expense of a non-swappable battery giving around an hour of use before needing to be re-charged. The Session 5 can even do 4K.

Cell Phone –  The best camera is the one you have with you, they say.  Most modern smartphones have excellent cameras, and can record in 1080p or higher video, many with excellent slow motion modes as well.  Grab an adapter for your tripod and use your camera for those third person shots, b-roll, and vlog footage of the day. 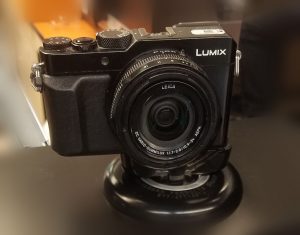 Point and Shoot – I have not found an action cam that has real zoom, they are all fixed focal length and while this is a great feature because its always in focus, it lacks Depth of Field.  A small point and shoot can provide a nice focal range, some excellent still photographs and even 4K video. Fitting all your gear in a pack is crucial to a self filming adventure, and a DSLR takes up a ton more room.

Go Pro Mounts – There are LOTS of options here, but primarily the chest mount and helmet mount are the primary ones you will want.  Most people start with this Amazon basics gopro case and accessories  it includes a chest mount and several styles of stick on flush mounts.  Another chest mount option is the Stuntmant Chest  Harness which can add stability to the mount, the gimbal and camera ends up weighing enough to make the standard chest mount bounce around.

Tripods- we could cover this for pages, but to keep it simple, you will want a small portable style tripod, and a larger folding tripod, between these two you should be able to setup for almost any shot.  There are lots of specialized tripod heads and sliders, if you’re inter

ested in those types of devices, drop us a line and let us know to cover it in the future.